Jean
Jean was born and raised in Duck Creek, WI. After she graduated from St. Joseph’s Academy she worked as a secretary for Packer City Transit. Jean met her husband, Mick, when she was out bowling one night with her girlfriends. He asked her out on a date and as they say, the rest is history. …read more! 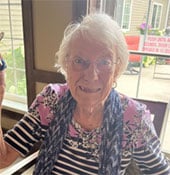 Joyce
Joyce enjoys reading, playing cards, bingo, and going on walks. She loves to spend time with her family and sitting out-side when the sun is shining. …read more!

Roberta
Roberta was born and raised in Escanaba Michigan. After she had finished school she started her career in a bakery in Escanaba in the sales department. She had then started to work with postal work for M & I bank selling stamps, and then American Medical Association in Sales. …read more!

Donald
Donald is originally from Escanaba Michigan and grew up in Bayview. Once he completed school he went onto take an apprenticeship as a journeyman in West Milwaukee at Honey Schroeder. Donald and Roberta just celebrated their 65th wedding anniversary! …read more!

Nina
Nina was born and raised in Iron River, MI. While in high school she worked as a secretary part time for two lawyers. She also played the clarinet. After graduating she moved to Milwaukee where she at-tended business school. …read more!

Don
Don was born and raised in Iron River, MI. He was very athletic and played football, basketball, baseball, and was in track. After graduating he worked as a delivery driver for a large bakery. Don received a football scholarship, so when his high school sweetheart, Nina, returned from college he married her and they moved to Marquette, MI, so he could play football and attend college. …read more!

Jean
Jean is originally from Iron Mountain Michigan, she had moved to Green Bay and grew up here! She had then attended UW Oshkosh for nursing! Once she had graduated she had become a nurse trainer at St. Mary’s hospital in Green Bay as an RN. …read more!

Nancy
Nancy was born and raised in Suamico, WI. She met a wonderful boy, Jerry, when she was in high school and fell madly in love. Jerry joined the military when he was only 17 and moved to Colorado. They missed each other so much that he came home and married Nancy when she was only a junior in high school so that they could be together in Colorado. …read more!

Mary
Mary was raised in Reedsville, WI. She began her career doing secretarial work for Invincible Furniture Company. She then married her loving husband, Bill, and they moved to the Green Bay area and started their family of six. …read more!

Jim
Jim E was born and raised in Joliet, IL. After graduating he enlisted in to the Navy. While there he went to school to be a weatherman for the Navy. He only spent six months on a ship, then worked mostly on land at Fleet Weather Central. …read more!

Pat
Pat was born in Green Bay and grew up on her family farm in New Franken, WI. When she was 16 she had to drop out of school to help on the farm. Over the years it bothered her that she never graduated, so at “75” years young she finally got her diploma! …read more!

Kasey
Kasey is our Administrative Assistant here at Emerald Bay. She was born and raised in Central Wisconsin in a small town called Mosinee. She graduated as an Occupational Therapy Assistant and has a heart for serving others! …read more!