Randy
Randy was born in Janesville, WI. He grew up in Beloit, WI. After high school, Randy worked for Aliant Energy for 40 years in Beloit. Randy has three daughters and 12 grandchildren. …read more! 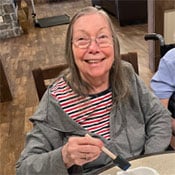 Barb
Barb enjoys all of the activities here at Emerald Bay but especially loves cards and bingo. …read more!

Joyce
Joyce was born in Green Bay and grew up on a farm in Bellevue. She attended a 1-room school house through 8th grade and then went on to St. Joseph’s Academy for girls. After graduating she did clerical work for St. Vincent’s Hospital, Dr. Brusky’s medical office, and Kraft Foods.. …read more!

Pat
Pat was born at her home in Krakow, WI. When she was 18 she moved to nearby Pulaski with some of her friends. Her first job was working at a toy factory in Pulaski. This was during war time and there was little metal, so the toys had to be made with wood. …read more!

Bill
Bill was born on his family farm in Hobart, WI. After graduating he helped on the farm for a while and then joined the Army for a couple of years. When he returned he met and married Florence and they took over his father’s farm and started his family. …read more!

Florence
Florence was born in Green Bay and grew up on her family farm in Hobart, WI. When she graduated she was a nanny for a little while, and then helped work on her family farm. She met her husband, Bill, at a roller skating rink. …read more!

Herman
Herman was born and raised in Green Bay. After graduation he went into the Army in 1941 for three years during World War II serving as a Medical Evacuator in the Philippines. Herman has 3 sons and 1 daughter as well as grandchildren and great grandchildren. …read more!

Sandy
Sandy was born and raised in Green Bay. After graduation she raised her five children. She sold Avon while the children were young. She stayed home until her youngest child was 10 years old. Then she went to college at NWTC for Accounting. …read more!

Marion
Marion was born and raised in Green Bay. She has a twin who is a few minutes older than her. Her parents ran Kellner’s Grocery Store, which was across the street from her parents house. Growing up she and her siblings helped their parents at the grocery store. …read more!

Carl
Carl was born and raised in Green Bay. After graduation Carl worked at C Rice Coal Company. He then served in the Army for two years for a Medical Company during the Korean War. After Carl served in the Army, he drove bus for Wisconsin Public Service. …read more!

Grace
Grace was born and raised in Carney, MI. While in high school she worked part time for a local hardware store where her dad worked. After she graduated she moved to Chicago to live with her sisters and started working for Sunbeam making kitchen appliances. …read more! 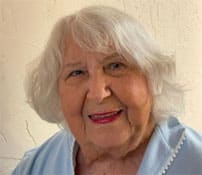 Audrey
Audrey was born and raised in Marinette, WI. After graduation she worked as a Secretary for Northwest Mutual Insurance Company for the City Loan Manager. Audrey went to college at Miss Brown’s Business School in Milwaukee. …read more!

Jim
Jim was born and raised in Green Bay. He worked for over 32 years for Fairmont Foods delivering dairy products to customers around the area. He also worked in the ice-cream department inside the plant. Those were some chilling days! When the company closed up shop he started working for Onie Machine where he did just about everything. …read more!

Bobby
Bobby is one of our Dietary Aids and has been with Emerald Bay for about 2 years. He was born and raised in Milwaukee. He loves to travel and has lived in places like DC, New York City, and Detroit. Bobby has four beautiful daughters! …read more!

Maddy
Maddy is a Med Passer here at Emerald Bay. One of her favorite things about her job is being able to spend time with the residents! …read more!