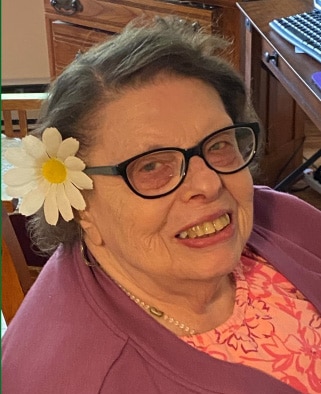 Irma L.
Irma was born in rural Kenosha county on a dairy farm. Having three brothers and one sister made working the farm a bit easier. She has memories of stacking hay with her sister in the barn loft, her brothers heading off to war and attending Dr. Martin Luther King College in Minnesota. After obtaining her teaching degree, Irma applied and was accepted to teach at a one room school in Nebraska, where she taught all grades. Teaching manuals and workbooks did not exist, so they used only blackboards and chalk. …read more!

October 1, 1979 – After 70 years of American control, the Panama Canal Zone was formally handed over to Panama.

October 3, 1990 –  After 45 years of Cold War division, East and West Germany were reunited as the Federal Republic of German.

October 7, 1765 – The Stamp Act Congress convened in New York City with representatives from nine colonies meeting in protest to the British Stamp Act which imposed the first direct tax by the British Crown upon the American colonies.

October 13, 1940 – The United States Navy was born after the Second Continental Congress authorized the acquisition of a fleet of ships.

October 13, 1792 – The cornerstone of the White House was laid by George Washington. The building, located at 1600 Pennsylvania Avenue, is three stories tall with over 100 rooms, and was designed by James Hoban.

September 25, 1789 – First U.S. Congressed proposed 12 Amendments to the Constitution, 10 of which, comprising the Bill of Rights, were ratified

October 14, 1912 – Former President Theodore Roosevelt was shot by a fanatic while campaigning in Milwaukee. Roosevelt was saved by his thick overcoat, a glasses case and a folded speech in his breast pocket, all of which slowed the bullet. Although wounded, he insisted on making the speech with the bullet lodged in his chest and did not go to the hospital until the meeting ended.