PANDEMICS CAN BE STRESSFUL
The coronavirus disease 2019 (COVID-19) pandemic may be stressful for people. Fear and anxiety about a new disease and what could happen can be overwhelming and cause strong emotions in adults and children. Public health actions, such as social distancing, can make people feel isolated and lonely—leading to an increase in stress and anxiety. However, these actions are necessary to reduce the spread of COVID-19. Coping with stress in a healthy way will make you, the people you care about, and your community stronger. …read more! 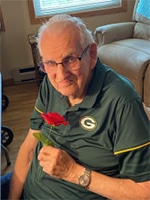 George S.
George is a distinguished gentleman that always has a kind word to say. George grew up on a diary farm in Calumet County. He had three brothers and three sisters that helped on the farm. He remembers milking 26 cows before leaving for school in the mornings. Even after hand plowing the fields by horse, George still found time to learn and play the tuba. …read more!

September 4, 1609 – Island of Manhattan was discovered by Henry Hudson

September 8, 1883 –  North Pacific Railroad across the U.S. was complete

September 10, 1943 – Hitler’s troops occupied Rome and took over the protection of Vatican City

September 15,1916 – Tanks were first used in combat, during the Allied offensive at the Battle of the Somme, in World War I

September 25, 1789 – First U.S. Congressed proposed 12 Amendments to the Constitution, 10 of which, comprising the Bill of Rights, were ratified